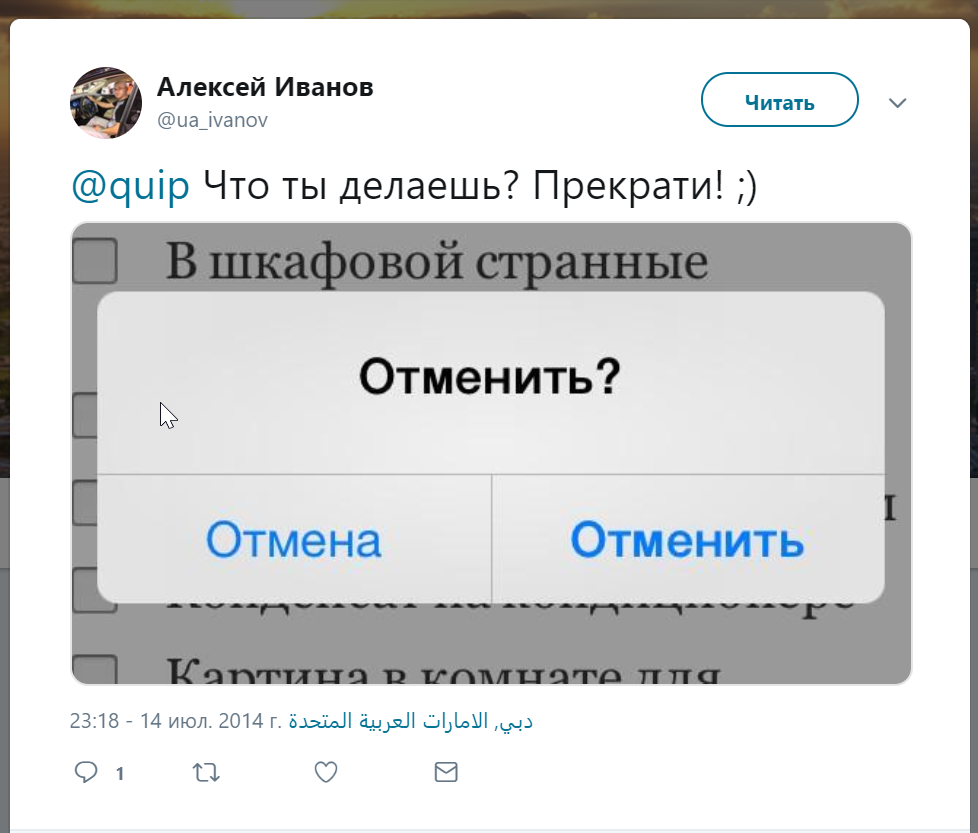 LQA, or language quality assurance, means viewing the language in the software or app in order to find linguistic errors, in other words, errors in which the translations are inappropriate for the context.

What is Localization Testing?

Localization testing means checking the localized software user interface (UI) to make sure everything is displayed properly and works as intended.

The Importance of LQA

Unfortunately, many developers of software and mobile applications think that localizing their apps is good enough to make international users happy. However, the users are not always happy – sometimes they get confused by the software and sometimes they just can’t stop laughing.

Let’s take a look at this strange localization example in Russian: The original English pop-up asked, “Are you sure you want to undo?” And the two buttons read “Undo” (confirming the user wanted to undo the changes) and “Cancel” to close the pop-up.

However, Russian can use the same verb for “cancel” and for “undo” – “отменить”, which you can see here. So this resulted in a very strange pop-up window that basically says:

Do you want to cancel?

No wonder the Russian user in the image above was frustrated!

Interestingly, this user interface was actually localized by a skillful Russian translator with extensive localization experience. However, while localizing, she never got the chance to see this screen in the app; she only had access to individual strings of the UI when she translated them.

The developers decided that localization testing and LQA testing were too expensive. Luckily, despite the translation issues, the product was still very good, and the users were willing to help by reporting problems when they noticed them. Then the translator and the developers promptly fixed them.

This example teaches one simple lesson about internationalizing software: LQA testing is critical; you should never consider it to be an unnecessary cost. If you don’t know all the languages your application is localized into, you should make sure someone professional takes a look at it in the localized version.

LQA is a critical step in the software localization process

Most translation agencies today offer localization testing and LQA as part of their services. It is the final step of the localization process, which is performed after implementing the language files and preparing the test version.

Sometimes LQA is performed by an another linguist – not the one who performed the actual translation. This linguist serves as an extra pair of eyes who may notice something missed by the original translator.

Actually when it comes to globalization testing, even if the same translator who did the initial work sees the translated text in the user interface, he or she may notice many issues that he or she overlooked while translating.

What is Localization Testing? Importance of Testing Functionality

Localization testing performed by a language service provider (LSP) helps discover functional bugs in the localized software that were missed by your in-house testers and engineers. It’s just that the linguists think differently from the way your typical developer thinks, and their approach to using the app is more consistent with that of the average user. The bugs discovered by the linguists are often serious, so having them perform localization testing can help avoid numerous problems for your users.

In the next section we’ll go over how to do localization testing and LQA.

Use our Localization Q&A Spreadsheet Template to get your teams on the same page and improve communication.
Get the Template!

So here is an LQA and localization testing checklist of do’s and don’ts for the final testing stage of your software or web application.

You know your product best; you should explain how it is to be tested. The test plan should preferably be accompanied by screenshots – to make sure the people who work on localization testing and LQA actually know what buttons to click and what screens to review.

Such a test plan will also help you estimate the time localization testing and LQA will take. You should multiply the time it took you to create the plan by 2 (if there are virtually no problems to report) or by 3 (if there are such problems).

–          Do involve local people for localization testing and LQA

This is a very important aspect many people overlook, but when you test a product intended for Czech market, the LQA should be handled by people in Czech Republic. Localization testing and LQA are important and complex. All the smallest details matter, such as SIM from a local carrier, local IP address or installing an app from local Google or Apple app store. In fact, we would recommend to always work with native speaking people who live in the country where the language you need is the official language—but this deserves an individual post.

Right now the industry standard is to perform localization testing and LQA for desktop versions of software (including testing on various browsers that you support), mobile apps on iPhone and Android and the desktop version on mobile browsers on the same devices. That generally means that the actual person who does this for you should have access to the latest (preferably high-end) Android device and iPhone as well as a PC or Mac.

But if you need some less popular devices (Windows Phone? Chromebook?) to make sure your product works properly on them as well, you should either find someone properly equipped or compensate for purchase of the required piece of equipment. This is a reasonable step if you intend to build a lasting relationship.

There’s nothing worse than instructions reading “click everything you can and open all the windows to see all UI elements and errors.” Chances are the linguists will not cover the entire functionality of your product—simply because they don’t know it as well as you do.

True, the services of a good linguist will probably cost you quite a lot (and testing/LQA is charged by hour and it is not something that can be done in an hour – even for a smaller mobile app on one platform only). But sometimes you may find a linguist deliver a report with dozens of bugs and the comment that they have only covered 10 steps of 15 in the test plan in the allocated 8 hours. Check the bugs reported and if they look reasonable, discuss how much more time it will take to finalize the testing. The linguist will definitely want to stick to the budget they define for themselves anyway so you will still be within the broader limits.

You may think that this or that typo or inappropriate translation of a button in context is not really life-changing and no one will probably notice it. And you will take your time and only implement the fixes a month or two after the product is launched—on a live production version, of course.

This is not a reasonable plan, to be honest. After all, why pay for localization testing and LQA not to use its results right away? Next thing you know your users will post funny screenshots of your app in languages you can’t read on Twitter and accompany them with some funny comments that you won’t understand. And the linguist you ask for help with this will only say, “I told you so.”

LQA and localization testing benefits far outweigh the costs. It means the difference between a clumsy and inappropriate translation of your software and a true polished internationalization of your software. The testing stage will protect your company from embarrassment and user dissatisfaction.

So now that you know how to do localization testing and LQA properly, stay tuned for our discussion of how to localize an iPhone application.

Effectively localizing structured content for elearning materials or user guides in the DITA XML format can be tricky. Work with a DITA XML Localization Company with decades of technical documentation translation experience.
Let us translate your DITA content

This is part 4 of our software localization series. See the other parts below.