Arabic, the Language Of the Desert Revered By Close To Two Billion Muslims

By Althea ChokweSeptember 7, 2021Language and Culture
No Comments

The Middle East is an amalgam of tribes and cultures, yet the most distinct commonality among them all is the Arabic language. When one mentions Arabic, most people think of its flowery script, melodic sound, and Islamic history. Learning it is ostensibly hard, but the grammar is simple to comprehend and the benefits are extensive.

From insight into international news to business opportunities, there is much to gain with fluency in this Middle Eastern lingua franca. First, we must gauge how fast one can learn Arabic, then analyze its historical significance, as well as how it plays into modern issues. Arabic is often associated with the desert due to the topography of some nations where Arabic is spoken.

How Does Arabic Work & How Can You Start Learning?

The Arabic alphabet, known as al-abjadiya al-arabiya (الأبجدية العربية), has 28 letters and is written from left to right. Yes, this may sound strange, but it is far from complicated! Here is a great link to help you start learning right away.

The alphabet mainly uses consonants and long vowels. Short vowels that connect the consonant sounds are not often written, except when harakat (حركات) is included. Harakat refers to marking short vowel sounds above consonants that they immediately follow. It is a good trick to use at the beginning of your Arabic journey, but you will have to wean yourself off of it once your knowledge builds up.

Once you pass this initial step, paying attention to grammar is especially important. There are various tenses to work through, as well as genders, irregular plural forms, and noun cases. It will be tricky at first but, as they say, practice makes perfect. Arabic is notoriously difficult to learn, but if you are up to the challenge, there are many resources to help you on your quest.

Submerging yourself into the culture is paramount in obtaining a well-rounded experience and quicker results in your language proficiency. Songs and television series are two entertaining and educational resources. Following Arabian influencers on social media also helps, as their Arabic captions will be a daily reminder to pick up that dictionary and grammar book. An Instagram handle such as @voguearabia provides bilingual captions and is an enjoyable experience for you to scroll through the fashion publication’s work in the Middle East. If you are more interested in the hourly news cycle, check out @bbcarabic for consistent updates in your target vernacular.

One small secret: reading natives’ comments under each post helps immensely! You will learn how to sound colloquial and blend in perfectly once you book that plane ticket to an Arabic-speaking nation.

Tell us about your translation need for a free quote!
Get Started 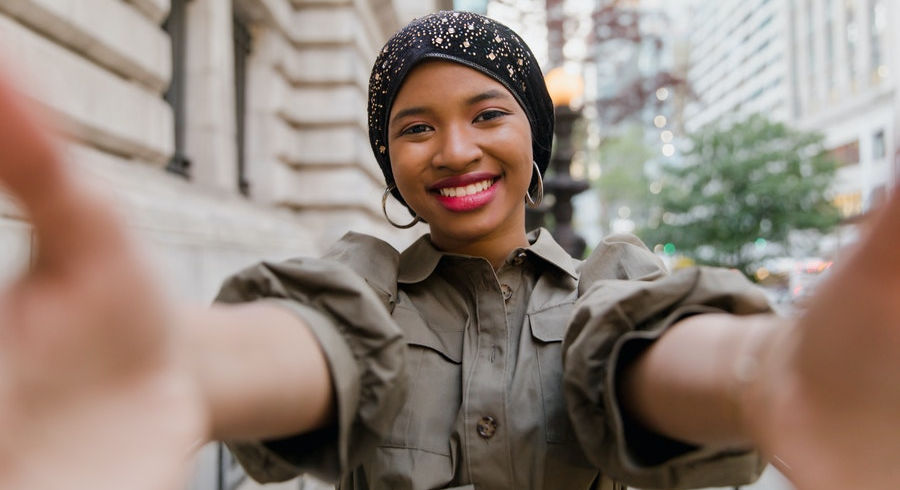 Learning Arabic will help you meet people and make friends, not only in the Middle East, but around the world.

Is Arabic a Language Spoken Outside the Middle East?

While ethnic Arabs dominate popular media’s impression of Arabian language and culture, other world regions have their fair share of both native and non-native Arabic speakers. Africa has 260 million who speak Arabic in many different dialects, most notably in the North, as well as Muslim communities scattered across the rest of the continent.

East African nations like Eritrea, Somalia, and Tanzania recognize Arabic as an official or minority language. Many African Muslims speak Arabic for religious purposes, with countries like Senegal, Burkina Faso, and Sierra Leone seeing the majority of their populations subscribe to the Islamic religion. The same goes for Asian nations with a significant number of believers. Keep in mind that, while not mandatory, learning Arabic as a Muslim is seen as taking a step closer to understanding the authentic message of the Quran. Thus, many view Arabic knowledge as a spiritual benefit, a definite sign that it is far from dying out. Arabic is an official language in many Middle Eastern countries, of course, but it is also a predominant language in some African countries as well.

For more on Arabic’s influence in East Africa, take a look at IVANNOVATION’s article on Swahili, where Arabic’s role in creating the language is examined.

The word for dialect is lahaja (لهجة), and there are 30 of them in modern Arabic. Classical Arabic and Modern Standard Arabic (the latter is less formal than the former) are both referred to as Al-Fusha (الفصحى). Fusha (pronounced FOOS-HAA) is the dialect of the Quran and provides a common link between all the regional dialects. Some variations of Arabic are discussed below.

Egypt contains the world’s largest Arabic-speaking population at an estimated 60 million. Although there are sub-dialects, Egyptian Arabic as a whole is internationally recognized, thanks to the country’s contributions to Arabia’s film, music, and news industries. There are also European influences on the language, reflecting a fairly modern history of colonization under the Ottoman, French, and British dating back to the 1500s.

One notable entertainer who has put Egypt on the map is Umm Kulthum. Her Arabic songs are considered to be the most authentic of modern Middle Eastern music. Listening to Umm Kulthum’s hour-long tracks, which are filled with classical Arabic poetry, will give you insight into why Egypt is so integral to the world’s perception of Middle Eastern culture and society.

One telling difference between Egyptian and Fusha Arabic is word order. In Fusha, a sentence proceeds as follows: verb-subject-object. However, in Egyptian Arabic, sentences are in the format of subject-verb-object. Considering that the Egyptian dialect borrows more words from European languages, including English, it is thought of as the easiest to learn. There are many dialects of Arabic spoken in various regions.

Sudan is one African nation with Arabic as its main official language. The Sudanese dialect has similarities with Egypt’s, but there are 134 indigenous vernaculars. Arabic made its first appearance in Sudan in the 14th century, additionally imprinting upon Sudanese social systems with the transport of Arabian culture.

Gulf Arabic is more of a spectrum of closely correlating dialects than existing solely on its own. The countries that employ it are Kuwait, Qatar, the United Arab Emirates, Saudi Arabia, Bahrain, and Oman. Natives call Gulf dialect Khaliji (خليجي), a name synonymous with the phrase “of the gulf.” Being able to speak Arabic can be a strategic advantage for doing business in many countries around the world.

A notable difference between Khaliji and Fusha is the vowel pronunciations: while Fusha has k (ك), Gulf speakers pronounce the same letter as a ch sound. Fusha’s vowel combinations of ow and ay come out to o and e, respectively, in Khaliji. Even so, some argue that Gulf is the closest dialect to Fusha, and there are many English loan words, as well.

Dubai is located in the Gulf region, specifically within the United Arab Emirates. If you see yourself living and working there, the Emirati sub-dialect is a good option. Because English is most commonly spoken there, however, understanding Arabic is not a must.

Levantine Arabic covers the Eastern Mediterranean seaboard and has working language status in Lebanon. You will encounter differences in sound between northern and southern Levantine, plus other distinctions dependent upon urban and countryside areas.

Levantine is simpler than Fusha in terms of verbal moods, noun case endings, and other features. Aramaic, a Syrian Semitic language best known for being Jesus Christ’s mother tongue, has had a hand in shaping Levantine vocabulary. A cool thing to note is that the Levantine word for “thank you” is merci–just like in French! Other influences are Greek, Hebrew, and English.

There are other dialects to take your pick from, but one ringing piece of advice is to learn standard Arabic (Fusha) first. Communicating with all Arabic speakers should take precedence over focusing on just one region.

Check out some of our other articles about languages:
8 Types of Spanish—How to Choose for Your Translations
5 Tips for Translating English to Spanish [+Free Tool]
Afrikaans in South Africa—What Is Its History and Significance Today?
The Alluring History Behind Swahili (And Why You Should Learn It)
Is Chinese Really the Hardest Language in the World to Learn?
When in Germany, Do as the Germans Do

The Islamic religion has wielded massive power within and outside the Middle East, due to Muslim armies brandishing the sword to conquer and convert. Yes, everyone has heard of the Crusades, but earlier clashes were more crucial in the question of whether Islam would be here to stay or not.

In the Qur’an, there are detailed accounts of battles resulting in mass conversions. The Battle of Badr, for example, is one that Muslims consider all-important in establishing their religion. On 17 March, 624 AD, a little over 300 Muslims defeated a thousand pagan Meccans through, per Islamic accounts, Divine Intervention. The immediate consequence? The prophet Muhammad, Islam’s founder, garnered enough respect to wield massive influence. Detail of domes and arches with Arabic script

Early Muslim conquests, missionaries, and trading routes continued Muhammad’s sway past Arabia to parts of India, Europe, and Africa. The Rashidun Caliphate, a political structure where a leader (caliph) ruled over the Muslim population, followed Muhammad’s death in 632 AD. Three more followed, until the first Arab Muslim Empire in the seventh century absorbed Byzantine and Persian territories, in addition to Spain and parts of India.

The Islamic Empire was doomed to end three centuries later, but the religion itself hung on to life under new rulers. This is how Islam came to be the third-largest creed in our world today.

Some world leaders have used the Arabic language to achieve certain goals for increasing power or stronger diplomatic ties. Gamel Abdel Nasser, Egypt’s president from 1956 to 1970, was one who sought to unite all Arabs, not just Egyptians. Language, like culture, was a tool in promoting the nationalist ideology of Pan-Arabism, directly challenging the Western world.

The widespread use of Arabic made it a plausible idea for Nasser to form a conglomeration based on common identity. His efforts to do so raised Egypt’s status as a formidable leader of the Middle Eastern world, also becoming its own mecca for Arab intellectuals and artists. Umm Kulthum, the aforementioned Egyptian songstress, is even said to have helped Nasser spread his ideas with her classical songs, marrying the roles art and politics play in shaping society.

Strikingly beautiful art and architecture can be found across the Arabic speaking world.

While President Nasser’s efforts largely failed, a resounding sense of pride remained among the Arab bloc. It also demonstrated that Arabic itself is more than just a language, but a symbol of regional dominance and historical consequence.

Arabic brings with it complex religious, social, and cultural contexts. The biggest misconception is that Arabic is difficult, mainly because of the strange alphabet, but its grammar is easier than believed. Besides learning about history and religion, Arabic students gain an immense advantage in the professional space as well.

There are various dialects to explore, but Modern Standard Arabic is the common denominator and, therefore, the safest bet. There is also an abundance of helpful resources, from news reports to legendary songs, a sure sign that anyone who puts in the work to learn will surely succeed.

Tell us about your Arabic translation need for a free quote!
Get Started

About the author: Althea Chokwe is a Masters student focusing on International Relations at Nottingham Trent University. She writes on a regular basis, interested in issues relating to society, global culture, the economy, and more. Althea also enjoys teaching herself languages and is aiming to become a polyglot. Connect with her on LinkedIn here.