Mademoiselle? Call a young woman that now in a French workplace, and you will probably be frowned upon, especially if you are talking to a feminist. France “bid adieu” to “mademoiselle” back in February of 2012, no longer seeing a need to differentiate between a woman who is married and one who is not.

The rules of communication in French business culture are simple: show respect, be courteous, and be aware of the “Eiffel Tower” hierarchy. View of Paris and the Eiffel Tower

Corporate communication is much more formal in French business culture, using Monsieur (M.) and Madame (Mme.). Managing communication in France consists of diplomacy while remaining courteous. Have you ever heard that the French were rude? That is because they are not reluctant to be direct about what they think or feel. They are also not afraid of conflict with their co-workers, meaning that speaking their minds tends to come easily to them, even in the workplace.

The “Eiffel Tower” management structure consists of firm separations between those in higher positions and the rest of the company. Do not be shocked if feedback goes about in a vertical manner rather than a horizontal one when trying to get answers to any questions you may have. It is all about the “chain of command.” In a French company, having access to information is a significant basis for authority and supremacy. This usually makes it challenging to get vital information. When communicating in this hierarchy system, remember to be formal when speaking to older people and those in higher positions. With those of lower and equal rank, it is more acceptable to keep it casual. But make sure you are greeting and addressing them per your existing relationship.

Decision-making is prone to be delayed by this meticulous corporate ranking and exclusivity of administration in French business culture. Usually, there is a lot of policy to get through, so how do you cut through it? Networking. The “réseau” (network) you are part of can help give you “special treatment” or advantages in your professional or personal life. It can also help you advance sooner when doing business in France. Once again, this is because many companies in France will have a distinct hierarchy that is frequently made up of a complex network of cliques. The younger generation is trying to break free from this hierarchy system by implementing more open-minded concepts and being flexible to change.

In the United States, we often start emails by getting straight to the point and asking what we want. But in France, this is considered pushy and rude. So, try to insert some casual, yet polite remarks before getting to why you’re emailing them. Like asking how their weekend went, how their day is going, or compliment their most recent work or accomplishment.

Even though email etiquette differs between France and the United States, there are still ways to go around the protocol. For example, cold emailing, which rarely ever involves exchanging pleasantries. If you’re trying to sell your services or products to a potential French customer, you better start with a catchy subject. Then include a concise explanation of how you plan to provide them with something that benefits them. The French do not have time to waste! So do not send the same kind of cold email you would send to your prospective American customers to your potential French customers.

It seems these days that there is a meeting for everything. And the French and Americans alike may have weekly sometimes daily meetings with one of the main differences being: the language. When conducting a meeting with French people, try to speak French or apologize beforehand if you do not know how to. This helps create a sense of respect for their culture and language. And it also helps go against the stereotype that Americans are ignorant.

Lunchtime in France is respected, which means they don’t take work calls during this time. So if you need to schedule a call or appointment with someone, avoid lunch hours. And if you wish to have a meeting with someone during their lunchtime, you can invite them to a restaurant. Keep in mind that French workers typically get a one to two-hour break for lunch, usually sometime between noon and 2 PM. 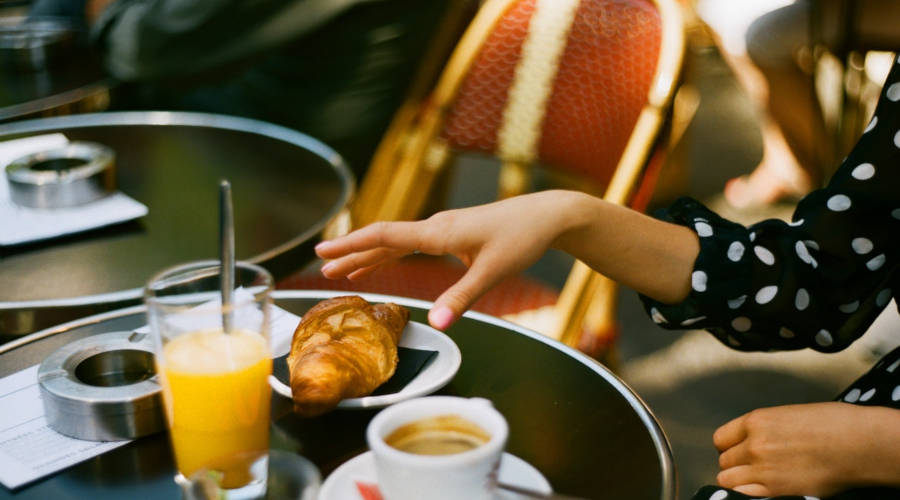 If you need to schedule a work call, avoid doing so during lunch. French people take their lunch period seriously.

During a lunch meeting, let the person you’re meeting with bring up business first. The French like to enjoy their food and may choose to talk about work once the meal is over. A good rule of thumb to follow is to wait until the dessert to talk about whatever topic you planned on discussing. Like in the United States, the person who invited the other to the restaurant is in charge of paying the bill.

Coffee breaks outside of lunchtime are quite frequent in France. They can also be extended by or combined with a smoke break. Coffee breaks can occur during the morning or afternoon or both. It is polite to take part in these breaks and socialize with your co-workers.

Thinking About Learning the Language?

Check out our article—Top 5 Languages for Great Job Opportunities in 2020.

Another meeting often follows successful meetings. It may be scheduled at the end of the first meeting or via email or phone a couple of days later. Any business that was not covered in the previous meeting can be part of the list of things to discuss in the second one. It is appreciated to send a follow-up email the same day or the next that includes notes of everything discussed. This can then be followed by a call a few days later, which can serve as the second meeting.

But keep in mind that it is not common to have business dinners, considering that the French prefer to reserve dinner time for socializing. This is the time to exchange thoughts and ideas and enjoy wine and fabulous cuisine. You should also be prepared to talk about where you come from, as well as French culture and politics. Finally, if you’re invited to someone’s home, arrive 15 minutes after the scheduled time. Arriving “on time” or beforehand can be considered rude towards the hosts. Unless, of course, you are invited to a restaurant. In that case, be on time!

Here is a list of French vocabulary you should have handy when working with the French: Learning a little bit of vocabulary can be a big help. People appreciate when you make the effort to learn their language even if your grasp of the language is basic.

During the holidays or for special occasions, it is common in the United States to hand out gifts with the company logo on it. In France, this may be considered tacky. Instead, you may give flowers, pastries or cake when invited to someone else’s home or after a social event. If you do choose to gift flowers, you can send them beforehand, so the person receiving them has time to arrange them. This will save them time from doing so during the event or gathering. But, if the gift is not event-related, then do not send it to your colleague’s or boss’s home. And if it’s the holidays, it is appropriate to send a card containing genuine wishes or a heartfelt message.

When you do business in France, be sure to pay attention to cultural norms so that you can make a good impression.

Taboos are rare in French business culture, despite the seemingly strict hierarchy. But do keep in mind the following two points. First, always attempt to speak French, do not merely start a conversation in English straight off the bat. If the conversation continues in English, do not overrate the person or group’s level of capability and understanding of the language. Second, if you are exchanging “les bises” (double-kisses, one on each cheek), do not reach out to shake their hand.

Also, like in the United States, it is considered rude to ask about salary. And it’s also in bad taste to show off your wealth. Being polite in all matters is a rule of thumb in French business culture.

Need to Translate French to English? Or English to French?

Put your French translation project in good hands.
Get a Free Quote for French Translation Today!

Still interested in business with the French? Then one more thing to keep in mind is to stay clear of demanding sales strategies. Do not pressure them into making hasty decisions. Hostile selling methods will not work with them. During a business meeting, be ready for a lot of conversation and swapping of information. Remember to be patient because decisions are rarely made in the first meeting.

Be sure to arrive completely ready even to initial meetings with sharp ideas and well thought out arguments. Aim to be on time for these meetings, but being 5 minutes late is alright. If you are running 10-15 minutes, call to let them know. After 20-minutes late, you should reschedule the meeting. As the largest country in the European continent, thus also the most diverse with over 66 million inhabitants, its strategic location makes it a central point for connecting with the rest of the world. Both the location and current economic status of France are significant elements that can support an international brand, local business, or the expansion of your business on a global scale. What makes French business culture so great to work with is the French peoples’ level of respect and courtesy amongst each other in the workplace. It is also lovely to work with their laid-back approach when it comes to meetings and work hours, full time being typically 35 hours a week. Despite the hierarchy, with younger management and startups rising, working with the French proves to be flexible and beneficial.

Gisel Olivares, Content Editor + Creator + Curator. Her online business, GeeOlives, provides social media management, copywriting and editing, web customization and development, and graphic design, among other related services to small businesses, nonprofits, and sustainable brands. She has a love for languages, traveling, social media, and writing. She is fluent in English and Spanish, and still working on perfecting her French while living in France for more than three years.